skip to main | skip to sidebar

One more portrait, one more kidnapping, one more ransom payed… 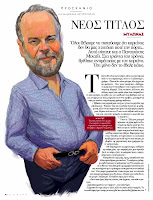 Mr. Mylonas was seized at gunpoint from his car outside his home in Thessaloniki. The ransom was payed and he was released."For me it was a bad experience," Mylonas said. "But, whatever doesn't kill you makes you stronger."

The brief was to show him relaxed, as if nothing serious happened to him. The magazine is Life&Style. Digital illustration
Posted by Nash Chovek at 14:42

© all images have my copyright!!! Do not use without my permission!